Reunited and feels so gooooood! Yes! Although things were looking bleak over the past few weeks, Dre and Bow are back in stride again! Picturing a situation in your mind is on thing, but executing it is another. Last week both Dre and Bow came to a conclusion that living separately would be the most efficient decision, but as my Grad School Professor Dr. Merget recited to us during weekly debates about current news topics, “Most efficient for whom? You must be careful using that term because it implies that something or someone will be left out”.

Dre decided to lease what he what he thought was a his dream home; a modern house with amenities that would make a techie squeal like a pig in excitement.He finally got the house he always wanted but couldn’t have due to Bow’s concerns – which were valid- about the home’s lake of safety regarding their children. Finally, the viewers get an opportunity to laugh again. Like the time, Jake gets caught in the stairwell’s cable railing each time he runs upstairs to his room or when we witness Diane’s pyromania kick in as she played with a remote controlled, open infinity fireplace (is that really a thing?) and let’s not forget about how baby Devonte almost walked straight into the open fire place while it was lit! But…the house is what Dre wanted (shade).

Meanwhile, Bow is struggling on her end with understanding how to execute the household tasks that Andre once handled. Tasks as simple as simple as taking out the trash and caring for the dog seem difficult for her. At one point the house alarm goes off in the middle of the night because a door is left ajar. Bow, Ruby (who is STILL living in the house) and the kids run into the hall in panic as the alarm continues to blare. Bow instructs the kids ti run in separate directions so the intruder or intruders will have to choose who to chase down and attack, Girl, what?!

Eventually Bow and Dre get adjusted to their lifestyles apart and again confidence in their decision to separate. Dre purchases furniture the kids can actually sit on, he cooks for the kids and even the kids seem to settling in on their new normal. The house looks as though it feels like a home.Bow and Ruby have one of the most serious, uplifting conversations I believe we have ever witnessed between the two after Ruby finds her mopping in Jack and Diane’s empty room. Ruby tells Bow that she has more strength than she realizes and the fact that she has giving her a hard time for 20 years and she hasn’t broken is evidence of that. Bow immediately taps into her new found strength and we see her rock her household tasks that she initially failed at.

Everyone happy.  Everyone is comfortable. Dre and Bow are both snuggled into a life that seems to make both happy. They likely realize that the decision to separate was the best decision they could have made. That tone changed when Dre called Bow in the middle of the night in tears because she had just received that here father- played by Beau Bridges in previous episodes- had died. Dre immediately rushes to the house without hesitation where he walks in and finds Bow sitting on the stairs inconsolable. I was in tears! I believe this is when they both realized how much they needed one another. Upon separating they considered everything except times like this. Ruby is living in the house with Bow and could have consoled her as well but she chose to call Dre for comfort. Until now, viewers have not seen Dre and Bow show affection towards one another for 4 weeks; that’s like 4 months in TV time!

The next scene occurs in their firmer family home after the repast of Bow’s father. Dre is cleaning and Bow is ushering the last visitor out of the house. I hate that something as tragic brought them together; but I’m glad it did. Bow expresses her genuine appreciation to Dre for his support. Their conversation implies that Dre (along with the kids) has been staying at the house for a few nights. Bow tells’s Dre that she wants him to stay! 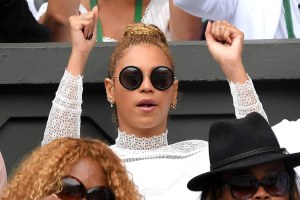 The next scene then takes us to Bow and Dre sitting on the couch in the marriage counselor’s office. The scene following, in my opinion, was a shout out to married couples. Literally, a free married couples therapy session! The counselor compared marriage to a Thanksgiving dinner; with the turkey being symbolic of marriage. The turkey is typically the main centerpiece meal at Thanksgiving. While the turkey is in the oven cooking, we move on to other things that are apart of the meal (kids, jobs, finances), but you must still check on the turkey. Dre and Bow neglected their turkey (marriage). She reminds them of the importance of spending time with one another so that they will continue to grow together. As she is speaking we see a montage of scenes of Dre and Bow spending time with one another, rekindling their love and still frequenting couples therapy. As time goes on the space between them on the therapist’s couch grows closer and they eventually sit hip to hip, hand in hand with a smile on their faces.

This episode was EVERYTHING! With my 5th wedding anniversary approaching, I my and I have had our fair share of ups and downs and lefts and rights (lol), we are still standing. We watched the last few episodes of this season together and stayed up for 2 hours discussing our interpretation of Dre and Bow’s situation and how we can learn from their mistakes. The story the therapist told bought everything together. Although this episode was well written with lost of takeaways, I hope the viewers never have to go through this emotional roller coaster again with Dre and Bow’s marriage.