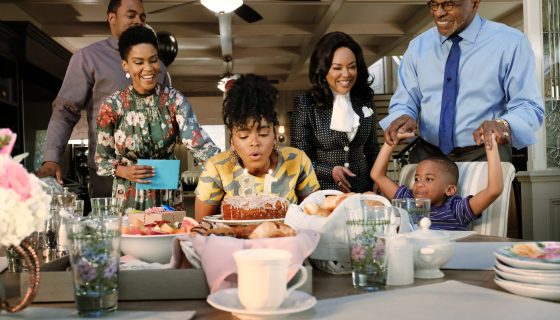 Everything is goin’ down but the word of God!

JUST THROW THE WHOLE GREENLEAF FAMILY AWAY!! I was out of town last week and didn’t get a chance to catch last week’s episode until this week. Iyanla was EVERYTHING!!! Auntie has been on 3 networks in one month! COIN!

This week’s episode had me sitting straight up, back straight feet flat as though I was posing for a picture for the church directory. I mean the Greenleaf family REALLY CUT up this week.

The Bishop has given all of his money to Rochelle to invest in cryptocurrency without doing his own research. I’ll touch on that later.

Dear Sweet Sophia is still coping with the fact that she will never be able to carry a child in her womb due to the removal of her ovaries. She is literally battling her faith like Job. She feels as though God has forsaken her and she doesn’t feel she can serve and honor a God that would destroy a sincere servant such as her. Zora checks in on her and Sophia kicks her out of her room. Her boyfriend stops by to check on her and she lashes out at him. He used the biblical word that I’ve never heard a young person used….he innocently referred to her as barren and that was the straw that broke the camels back. She yells at him and calls of their relationship and kicks him out too. I wish Iyanla had stopped by Sophia’s room last week because she clearly needs guidance and Grace only seems to show up when she has a break down. In my opinion, Grace could be more compassionate about the situation and understand that because Sophia is so young, it is difficult for her to process the fact that she will never be able to carry a baby. For instance, when Sophia stated that she no longer wanted to teach children’s church, I wanted to smack Grace through the TV when she acted as though she couldn’t under Sophia’s reasoning behind no longer wanting teach the children. I also wanted to smack her because it seems as though she is more dedicated to supporting a woman who has been imprisoned for killing her abusive husband and will be the first client of the church’s legal defense ministry. Whatever!

Zora is still living with Lady Mae as punishment for being fast and furious, but her parents throw her a breakfast party at the Greenleaf mansion to celebrate her 18th birthday. The mood and the atmosphere are very light; everyone, including Zora, seems genuinely happy in that moment; especially when her parents gift her with tickets to see “Hamilton”. It was great to see her smile again and I was happy to see how happy she was when she chose to go with her mom. Lady Mae shut down shop on that! LOL! She informs Jacob that Zora is not allowed to go because the show is past her 7pm curfew. Clearly Lady Mae does not understand how expensive Hamilton tickets are and how difficult they are to obtain! Jacob sided with his mom which I feel was a big mistake and Karessa does too. She shades Lady Mae by reminding Jacob that he was a mess and it took years for him to get his ish together and if Lady Mae couldn’t fix him, what makes him think she can fix Zora.

I think Karessa and Zora could have used that time together to reconnect a clearly broken bond and perhaps Zora could have gained a better understanding of why Lil El Debarge is no good for her. It also would have been a great opportunity for Zora to be reminded of her worth! But nope, Jacob sided with his mom and stood his ground, which pushed Zora farther away from them and closer to Lil El Debarge. She hasn’t learned anything. Lady Mae is dealing with her own BS and definitely has no time to babysit a “grown” teenager.

Lady Mae realizes she is at her wit’s end when she learns that Zora went through the purse of her cleaning staff to sneak a peek or convo with Lil El Debarge. She gives Zora  a tongue lashing like only she can and removes the cordless phone from Zora’s room (as if that will change anything) and storms out. Meanwhile, Zora is pissed and has a mini temper tantrum. She slightly reminds me of a drug addict feening for that next hit! This whole situation with her and this boy makes me wonder how she got to this point? Did allowing her to date too soon lead to her confusing love with obsession? Did they think of her maturity instead of her age when they decided to allow her to start dating? Were they lackadaisical with their parenting when it came to her dating this young man because he was in the church and they assumed he was raised with the same values that they taught Zora? How was Jacob as a husband before Season 1 of Greenleaf? We have only seen the good husband/father of him. I have so many questions?! Later, we see Zora packing her things to leave Lady Mae’s home. Lady Mae assumes she is packing to go back home.

Zora reminds her that she is now 18 and is free to do whatever with whomever. Lady Mae realizes that Zora is planning to leave with Lil’ El Debarge she gives her heartfelt speech a with a huge amount of desperation in her tone. Zora is unbothered and walks out of the room, luggage in tow. Lord, come see about your child!

Charity seems to be trying to gather herself. Perhaps her intervention with Auntie Iyanla worked. She has been voluntarily confined to her suite for the past 4 episodes. Bishop visits her and dishes family tea. When he tells her that Lady Mae has Zora on lockdown, Charity responds in disgust, “When is she going to get herself together?”. The Bishop quickly responds, “When are you?”. I…GAGGED!

After they are done throwing shade at one another, they embrace and Charity tells him she will miss him when he moves out of the mansion.

Tension is thick between Lady Mae’s assist and Maxine Patterson’s assistant as they prepare for “A Day With Lady Mae”. The event will be bigger than expected now that Maxine Patterson has been added as a guest host, so Lady Mae makes the executive decision to change the host site to Calvary instead of an off site. The gag is that “A Day With Lady Mae” will now be held on the same day and the same location as Bishop’s “Silver Jubilee” event. Lady Mae is fully aware of this and proceeds with her plan. When the Bishop is made aware of her plans he confronts her and she stubbornly stands her ground. He reminds her that “A Day With Lady Mae” will be her last day at Calvary. She replies with a crazy look in her eyes, “I’ll go where the Lord leads me to go”. Oh this will be GOODT!

Later we see Bishop trying his best to convince Lady Mae to dig into their shared account to add to what he has given Rochelle so to invest in cryptocurrency so that their IRS issue can go away. THE….NERVE! Of course she turns down his request and tries to explain to him that Rochelle does not have his best interest and cannot be trusted. Bishop aint trying to hear anything negative about his lil boo thang. Perhaps he has never heard the old saying, “A fool and his money will soon part”.

gif tink tink
Jacob, Jacob, Jacob!!!!! Jacob confides in Tasha aka Miss Bodycon Dress about how hurt he is that she still brings up his past transgressions, which we the views have NO knowledge of! Did he cheat on her? Did he beat her? Is he the reason Zora is the way she is; because of what she has seen her mother put up with? I digress. Tasha tells him that she too has a past and gives him a hug and an UNHOLY KISS. Jacob was genuinely shocked, as was I. She is attracted to him…or his position as Pastor! Remember last week he stated that he considered her a part of the family. We’ve never seen him show any interest in her when she sashayed around him; but clearly things have changed. Instead of him reeling back, he kisses her back passionately…in his office…at the church!!!

I jumped up and almost lunged at the tv cussing!!!! WHAT IS GOING ON?! I MEAN REALLY! The camera cuts before they go any further, which I’m sure they did because we later see Jacob driving home and continuously wiping his mouth with a towel. Baybeeeeeeeeeee, so you know they did more than kiss. He immediately showers when he gets home and tells Keressa that he is okay with Zora coming home. Little do they know that Zora has her own plans. Psalm 37:25b Jacob! You aint righteous beloved and that’s why ya daughter is out here actin all wayward and what not!

We see the Bishop meet with Rochelle with more money to invest and I sat there trying to figure out where he found extra money! While planning “A Day With Lady Mae” the assistants inform Lady Mae that a deposit needs to be made immediate for the caterers that were selected for the event. Lady Mae logs on to her bank account online and sees that money in her and Bishop’s shared account has been emptied! The Bishop gave the money to Rochelle!!! When Lady Mae confronts him; he admits that he took the money and it will be replaced in two weeks. Dummy! She read him for filth and put him out and he spent the night sleeping at his dear friend Percy’s funeral home.

I cannot imagine how much worse things can get for the Greenleaf family, but I love the mess!