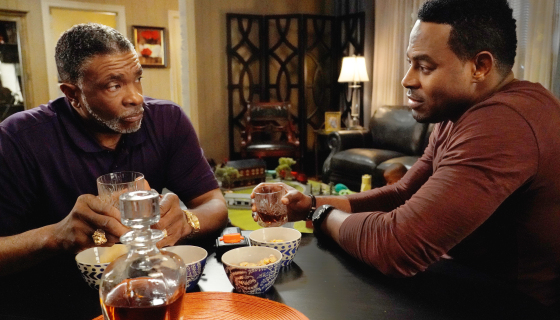 Lord, I was in my feelings the entire episode. The focus the entire hour was the Bishop’s redemption. Redemption with the viewers because we were/are completely over his lustful spirit of that harlot Rochelle Cross. Redemption with God because he clearly realized the bad decisions he has made and unrighteousness could possibly be falling on his seed. Reference Psalm 37:25. I love seeing him as a father and grandfather instead of a husband, pastor and a jump off.

Charity was seen in her suite looking uncomfortable with a beat face while Kevin and Aaron playing with baby Nathan. Part of me still feels that she think she can win him back; but i applaud her growth which could lead to her being great at the co-parenting thing. I was shocked at how open-minded Bishop was.  In reality, we hear so much about Pastor’s and church folk looking down on same-sex marriages and relationships. Who knew Bishop was so progressive?! Aaron pulls Bishop aside and informs him that his father – Bishop’s former friend and Lady Mae’s side piece – is deign and would like to speak to him. Bishop acknowledges the request but does not give confirmation of whether he will visit or not. He eventually does and forgives him and vows to never see him again in this lifetime.

Sophia
We then see him visit Sophia’s suite. I find it odd that Grace is doing all she can to show a woman, who doesn’t believe in God, just how strong God is. But we are CONSTANTLY seeing Sophia alone and wallowing. She is young and does not know how to process an event that she feels has changed the trajectory of her life. Where is her mother?! My hearts breaks for her. She is a child! Grace consistently tells her “just trust God” or “it’ll be okay” which clearly is not helping her child heal. Historically, it has been common for black Christian households to to look to God instead of seeking help from a licensed professional, which is clearly what this child needs. Grace is slowly on a path to becoming to Sophia what Lady Mae was to Faith!

The good Bishops sees Sophia’s pain and talks about how he copes with his Parkinson’s diagnosis. He takes away a bit of her loneliness by telling her that he understands her wanting to stay home and in her room to avoid people making clumsy statements (i.e., “God did it for your good”, “Girl at least you’ll never leave your cute shape”, “Girl, you luck you don’t have to worry about getting pregnant, <insert additional stupid comments that people make towards women who struggle with infertility>). He also explains to her in a nutshell that we are only here for a season and while here, as we age, our bodies deteriorate and eventually fades away (death). Although their conversation is a bit grim. I thought it was very sweet. Rarely do we see grandparents and grandchildren bond in such a way on television. He encourages her to come back to church for his Silver Jubilee. She is initially hesitant, but she does. He preaches a mighty sermon and is shocked that his sermon did not stir up Sophia’s spirit. They meet in his office after church and he delivers her a personal sermonette, that was so simple even a dummy could understand. He compares life to a train and explains that our parents brought us all into this world with no control over the direction of the train. He explains that God is the conductor of the train and although there may be curves and unexpected turn, our conductor is doing His best to bring us to a safe and satisfactory end. That was a word!!! Sophia, beloved, it’s difficult for God to catch her to bring you back to your joy if you keep running from him.

Jacob
Later Bishop stops by Jacobs home while his grandson is on the floor near them playing. Bishop served all types of 2 Timothy 4:2 tease which references preaching and teaching when folks wanna hear it and when they don’t wanna hear it. He informs Jacob that he is on to what went down between Jacob and Tasha as he walked into Jacob’s office. Jacob insures his father that he is no longer down with OPP and the topic switches to Bishop and Lady Mae’s divorce. Bishop states that he is conflicted about signing the divorce papers. Jacobs encourages him to ponder on his decision longer. One things that stood out the most towards the end of this scene is the camera zooming in on Jacob’s son playing with a moving training on the track…SYMBOLISM! Bishop is running away from the covenant of marriage and likely looking for Jacob to validate his decision to divorce Lady Mae. He is in too deep and has no direction.

Percy
Mr. Percy’s home is near a train track and each time Bishop returns to visit his new temporary domicile, a train swiftly passes by and catches his attention, the second time it happened, I yelled to the TV, “it’s a sign from God fool! Go get your money back, then get your wife back! STOP RUNNING!”. The first time he visits Mr. Percy’s the home the first person he sees is a paid escort who informs him that Mr. Percy has fallen asleep and asks if he would like to be serviced as well. Lawd! Bishop words were all tangled up trying to find the word “no”. Hilarious! The next morning, Mr. Percy encourages Bishop to mend what is broken between he and his former friend/Lady Mae’s former side piece.

After the Silver Jubilee and Bishop’s meeting with Sophia we seem him Percy’s house once more. This Bishop is already confused about what decision he should make regarding signing the divorce papers, but Mr. Percy helps makes it more difficult by telling the Bishop how lucky he is to have a woman like Rochelle available to take care of him. Finally, a proverbial light goes off in Bishiop’s head that seems to pose the question, “why does Rochelle want me?”

Baybaaaaaaaaaaaaaaaaay!!! What Mr. Percy said clearly stirred something up in the Bishop because later we see he and Rochelle in his office and he is literally telling her- without telling her – that he is not good enough for her. He insults his own age and reveals that he has Parkinson’s disease and admits to being unsure as to why she chooses to love him rather than someone younger and healthier. Rochelle being the coniving harlot that she is flipped the script and accused him of accusing her of using him. She is very clever! She then tells him to pull up “the app” that she downloaded on his phone to show his investment which is does. He is clearly shocked at how large the investment has grown and is immediately regretful for doubting her character. She cries. He hugs her and apologizes. Let’s pause for a second. Rochelle stated that she installed the app for him. Bless his heart! Lord only knows what app she downloaded and what the amount he looked at truly reflects. Typically you have to authenticate prior to logging into any app involving money. She is good; preying on his weakness, his lack of technological intelligence and his need to be needed.

This episode was centered around Bishop. It seems as though he was unintentionally trying to “get right” with everyone or do his “due diligence” as a father and grandfather. This episode struck me as eerie because the conversations and revelations that were had throughout this episode usually happens before someone dies; in reality and on television shows and movies. This episode has a purpose; perhaps it’s setting the scene for what’s to come. Perhaps the writers are trying to develop a relationship between the viewers and the Bishop because the only friend he will have when Rochelle runs off with the church’s money is Jesus. On top of all that has happened, both he and Lady Mae have finally signed the divorce papers. LET THE MESS ROLL ACCORDINGLY!