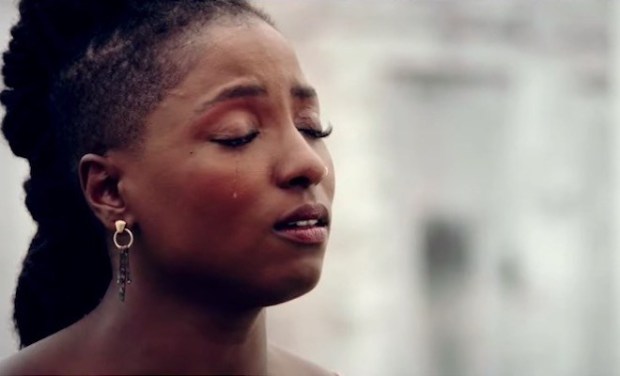 The Season 4 opener of “Queen Sugar” came out the gate swangin’, not swinging, but SWANGIN’!

The Season 4 opener of “Queen Sugar” came out the gate swangin’, not swinging, but SWANGIN’! The episode opens with Nova doing a video promo for her new book Blessing and Blood. She states that she is offering HER truth as a sacrifice and example of how the truth can set us free. She also states that her intention is to help others become truth tellers as well.

She is clearly nervous, but her nervous is not only tied to releasing the book; her nervousness is tied ot the fact that the book will contain all of her family’s shameful secrets and lies WITHOUT THEIR KNOWLEDGE OR PERMISSION. The Bordelon Family has survived by sugarcoating the truths and bottling secrets and Nova book will surely “shake some tables”

In the scene that follows we see Charley boo’d up with Mr. Lover Man on a romantic getaway. Both are enjoying a couples massage while overlooking a beach. She seems to be genuinely happy, but she always seems genuinely happy with every man she is “with” until he cheats on her, steals her family’s property or kisses her sister; all of which have occurred, but I digress…Keep smiling sis!

Meanwhile, Ralph Angel receives a letter informing him that he has successfully completed his parole requirements. Although he has been out of jail for many years, being on parole is comparable to being bound. In Louisiana, there are so many conditions an individual on parole must follow. To name a few: they have to live in a certain determined by the parole board, they have to keep in constant contact with their parole officer who sometimes sets them up to be placed back into the penal system, they have to conduct themselves “honorably”, which is subjective, they must avoid places that disrupt or harm their character (subjective), pay the Board of Parole, which is difficulty no one wants to hire an individual with a  felony. and so on. The conditions can be hard to met for anyone who does not have a supportive family like The Bordelon’s. But now Ralph Angel is FREE! I can only imagine how great he feels in this moment. The way he takes of running after taking in the good news is very symbolic. He has now a proverbial finish line that so many have failed to.

We then see Aunt Vi celebrating the grand opening of Vi’s Prized Pies and Diner. A traditional second line band escorts her and her family and friends to her new establishment to cut the ribbon. Aunt Vi thanks everyone including her ancestors for protecting and guiding her to this moment. Upon entering the diner, the celebration ensues, and we see everyone so happy and gleeful; pure unadulterated happiness! Blue is selling mini versions of Aunt Vi’s pies and the Bordelon family and aunt Vi’s customers are having a fabulous (likely short lived) time. A councilwoman stops by to congratulate Aunt Vi, but is clear that she has other intentions, when she informs Charley that she has a gift for Aunt Vi from her and Frances Boudreax. Here we go…

The councilwoman informs Charlie that Landy Enterprises made a sizeable donation to her reelection campaign and she makes it clear that her only concern is whatever will benefit the city (the private prison that will be built, perhaps?).

Meanwhile, while at the party Ralph Angel and is friends are socializing when one suggests that Ralph Angel hire newly released individuals to help farm in an effort to integrate them back into society. I was shocked at how hesitant Ralph angel was when asked to aid someone who is in the position he was in not so long ago, but I also understand that the farm is his “baby” and you can’t trust a stranger with your child. When a child is seriously injured or worse, the first question asked is, “where were the parents? How did they allow this to happen?”. Those are the questions Ralph Angel would have to answer if he hires someone he doesn’t know, or trust and they harm his “baby”; I get it. During their discussion in walks Darla looking healthy, happy and sober! She and Ralph Angel explain non-verbal pleasantries from across the room. I almost forgot that they are on good terms. Darla finds Aunt Vi and congratulates her on her on grand opening. Vi smiles, while play Darla complete DUST! She thanks Darla and tells her she is welcome to make herself a plate before she leaves. I cackled like witch because Aunt Vi said it with a smile and with such a loving tone; like a true Southern woman. Later Darla and Ralph Angel speak and she asks Ralph Angel if can keep Blue an extra evening because has a date. He complies, although he seems to feel some type of way about what she has told him.

Side note: Tevin Campbell plays Hollywood’s cousin “Junior” and sings a snippet of “Amazing Grace”. His voice is still soft as silk

The first climax of this episode occurs when a party goer says to Nova in earshot of Hollywood and Mr. Prosper congratulates Nova on her book and tells Nova that that her sister in New York saw a billboard with Nova’s face on it advertising her book. Nova downplays the importance of the book and she walks away in order to avoid further conversation when the woman enquires about the content of the book. Later, Nova goes to the kitchen to fill a customer’s request, when Hollywood asks why she is being so secretive about the contents of the book. He immediately suspects that the contents of the book will hurt the family. Nova pretty much solidifies his assumption by ensuring him that she will speak to the family. Hollywood reminds her that his loyalty is to Aunt Viand tells Nova that id the book will reveal family secrets, she owes the family some type of preparation prior to the book being released. He then storms out.

Nova is asleep into the following scene and we are welcomed into her dream. She dreams of herself, Ralph Angel and Charley as children playing in the yard on Bordelon land and we hear her mother call the children inside for dinner. As the children run towards the house Nova lags and trips and falls. When she gets up she is adult Nova and standing before her, dressed in white, are adult Charley and adult Ralph Angel at her with a stern face and the look of disappointment and/or hurt in their eyes. Before she fell and as they were running towards the house, I noticed that little Ralph Angel, who seems to be about 4 or 5, was fast enough to beat Nova who seems to be at least 12. Perhaps the dream symbolizes the fact that Ralph Angels is further ahead of Nova because he has the farm to tend it. It’s his job, it’s something he is proud of. It gives him purpose., The same can be said about Charley and the sugar mill she owns; but what does Nova have? What is her purpose? What has she consistently been successful at? Something to ponder.

When Nova awakens, she decides to drop off the manuscript of the book to each of her family members. I’m not sure if her dream prompted her to do so or the scolding she received from Hollywood or both. She stops at Charley’s office first. It’s harvest season and Charley is obviously very busy. Charley also mentions that she will be a speaker and award recipient for a women in business panel. Nova offers to join but Charley declines the offer and minimizes the event. Nova begs Charley to read the manuscript and Charley ensures her that she will. She congratulates Nova and returns to business; leaving a copy of the book on her desk.

Next. Nova visits Ralph Angel at home to drop off his copy. He and Blue are outside painting and both are in great spirits when she pulls up to the house and greets them. She walks into the house and leaves a copy on Ralph Angel’s desk, formerly her father’s desk. She slowly backs out of the room and slowly scans every corner and of the room with her eyes as though it may be the last time she sees or steps foot in the home. I wonder if the book will hurt Ralph Angel more than the others.

We then see Charley accept her award at the women in business event during her acceptance speech, she is interrupted by a reporter who has read an advanced copy of Nova’s book At this point Charley has not read the book. The reporter shocks Charley and the crowd, when she asks if Charley really attacked a woman who was accused of sleeping with her ex-husband Davis. She also inquires about the validity of paying off women who were sexually assaulted by Davis. All of this was in Nova’s book, along with the fact that she implies that Charley is a poor example of a woman. Whew, child!

Charley is stunned, speechless and looks as though she has seen a ghost. I was shocked right along with Charley and the audience because clearly this book is centered around NOVA’S truth and NOVA’S opinion about her family’s life decision. Charley rushes home and gulps down a full glass of wine as she begins to read Nova’s manuscript that she left for her earlier that day. Charley stays up all night reading the manuscript in it’s entirety. She calls Ralph Angel, with urgency in her voice, to inform him that she is on her way over and begging him not to read the manuscript. She also contacts her lawyer requesting to draw up a to cease and desist letter to stop publication of Nova’s book. We later see Ralph Angel skimming through his copy of the manuscript. He reads a page where Nova states that her book is a declaration of independence that has bound, crippled and suffocated her family. She goes on to state that the circumstances of Blue’s conception and birth make Ralph Angel make Ralph Angel less of a man and less of a father. She goes on with a plethora of insults towards Ralph Angel including the act that the family has carried the lie that Ralph Angel is Blues biological father.

Hollywood is at the diner and walks into Vi’s office where he sees Nova’s manuscript. It is safe to assume that Aunt Vi has not read the book because it is in the same spot where Nova left it. In the page of the book Hollywood reads, Nova states that her family has been shackled by a history of lies and shame and she feels as though she has been called to drag it all to the light so that the family can heal. Nova goes on to state that all of this can be seen in the life of Aunt Vi who lives her life as a strong, black women, but is anything but that.

After the contents of the manuscript have been revealed, we see Nova at her father’s grave speaking to him and praying. At this point, I am completely over Nova. She can save her prayers. This book is about the dangers of holding on to family secrets, yet she has kept the contents of this book a secret from her family! How ironic is that?!This episode has set the precedence for a highly anticipated season of raw, uncensored emotion. Everyone in some way shape or form will feel the wrath of Nova’s decision; even little Blue.

“Alexa, play Knuck If You Buck by Crime Mob…”